How to Do the Sissy Squat

The sissy squat is a severe misnomer, possibly being a purposeful ironic name in the same sense as you might call a tiny guy 'Big Geoff'.

The reason for this is that there's nothing special about the sissy squat at all; in fact, one of the most challenging exercises you're likely to attempt any time soon.

The sissy squat is much like the standard squat and trains the legs, but the position of it makes the movement so tricky that you won't need any additional weight (though some crazy people still opt to add dumbbells to it).

For the sissy squat you see, rather than having your feet placed flat on the ground as you would in an ordinary squat, you are instead on your tiptoes with your knees point forwards and your back leaning backward.

The best way to describe it is that you'll look a bit like Neo dodging bullets in the matrix, or as though you're trying to touch your toes.

From here you then bend at the knees keeping your back straight as though you were doing the limbo and should feel an intense burning in your quadriceps, hamstrings, glutes, and calves.

One of the things that makes this so difficult (other than how much muscle power required) is that it can be tough to balance while performing this move. If you struggle, then, support yourself by placing one hand on a surface.

Eventually, with practice, it should become more comfortable - at which point you can introduce dumbbells by holding them in your hands and having them dangle directly down by your sides.

What is Sissy squat 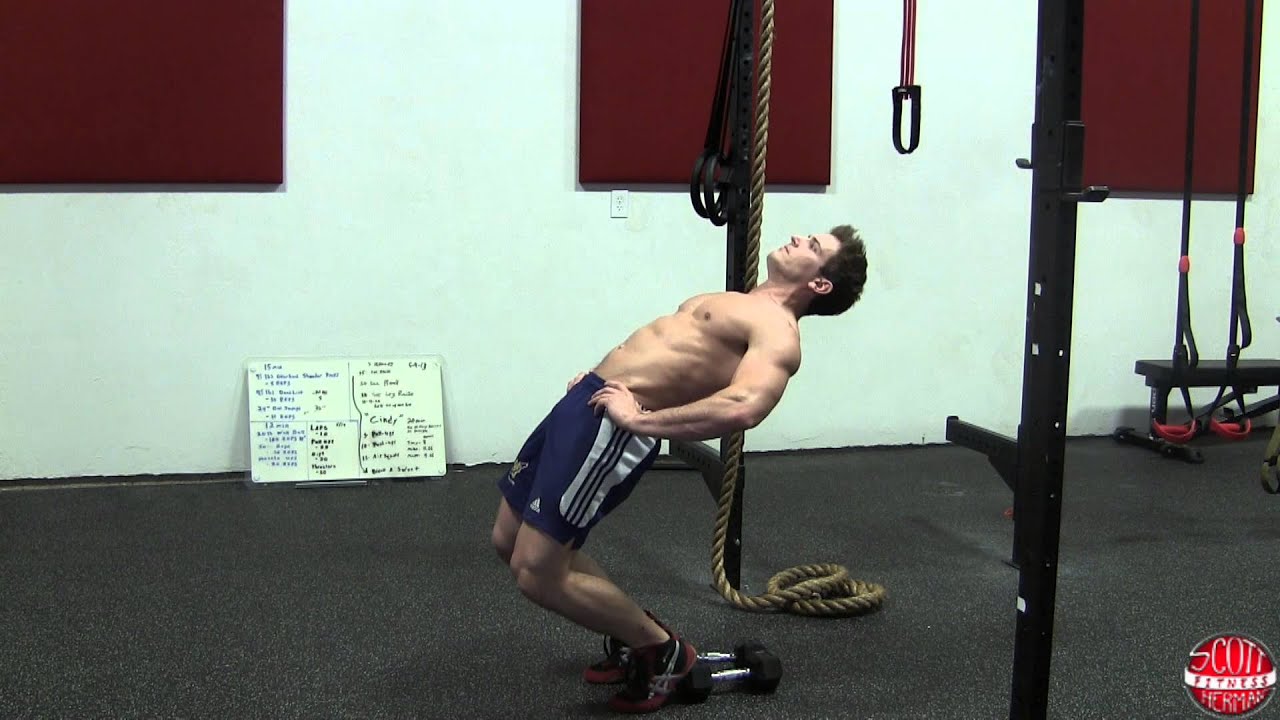 The squat is hailed by bodybuilders and powerlifters alike as the most critical move in their arsenal. Some go as far as to say that it's impossible to improve past a certain level without squatting.

As well as being an excellent compound movement that uses almost every muscle in the body, it also triggers the release of certain desirable chemicals such as growth hormones.

It's versatile too, and once you've got your technique down you can start experimenting with variations - holding the barbell in front of you across your chest, adding on a shoulder press, or leaving the weights altogether and doing a 'sissy squat'.

One great workout even involves doing nothing but squats for an entire legs session -twenty reps of squats to be precise.

It's a killer. Unfortunately, many people leave the exercise out of their routines entirely, often because they are afraid to get it wrong and injure themselves through lousy technique.

To perform a perfect squat load the barbell up and set it to a good height on the rack (so that need to just slightly bend your legs to get under it). Then stand underneath it so that it rests across your shoulders and base of your neck.

There's a little groove there which it should fit into nicely - remember that pads are for pussies.

Now grab the barbell with both hands - one near both end - and get a reasonable distance that feels comfortable. Now stand up straight and lift it off the rack, step backward, and get your feet around shoulder-width apart. 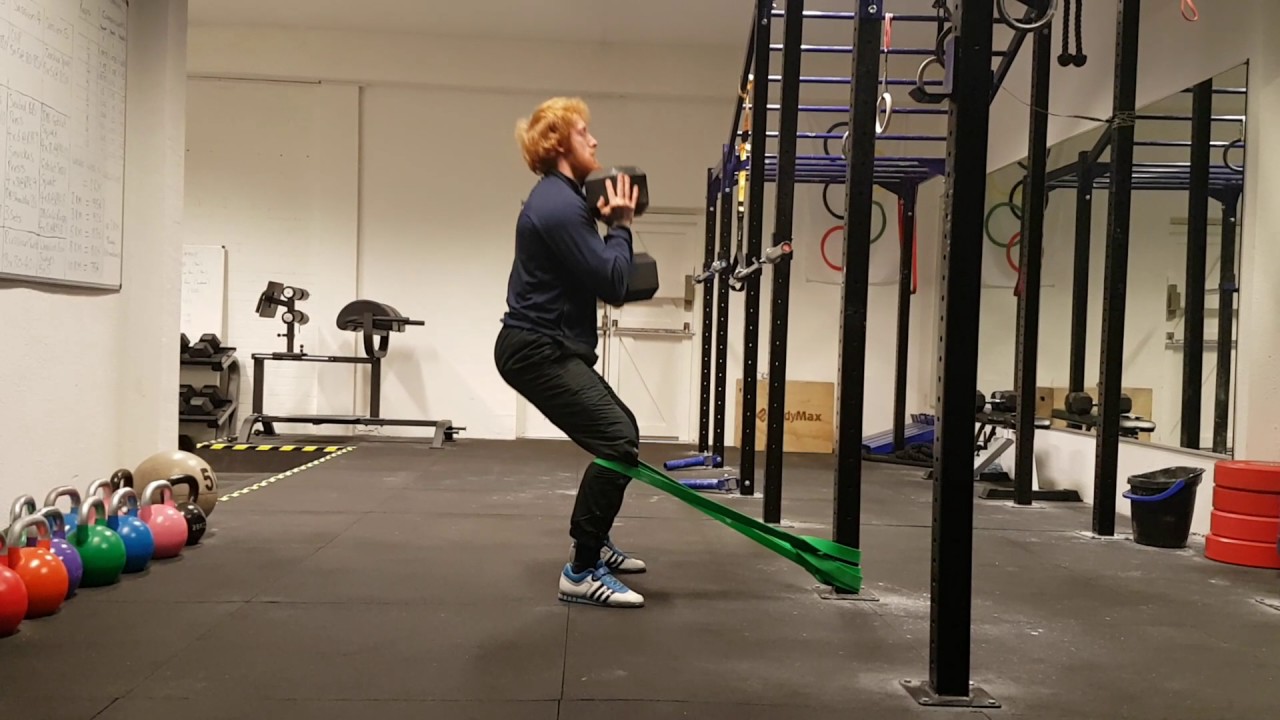 Isolating those quads Sissy Squat with the resistance band Perfect for working on core strength, balance, and that leg burn.

All you need are two thick resistance bands and a stable upright to attach the bands to do sissy squats anywhere. Double wrap each band around the upright at about knee level.

Step into the band, so it is tight against the back of your knee and steps back, so the groups are almost holding you up from falling backward.

At this point, you can perform the exercise. Sit your hips back and drop down until your thigh is just parallel with the floor. Stand back up to the point only before your knee extends. Do not let your knees move forward or hunch your upper body over.

The nature of the sissy squat allows one to move through a more "functional" pattern of knee extension.

Sissy squat on the smith machine

Execution- Rack the bar at the height of your collar bone and put the safety pins in place at a depth of your squat. Place the bar on to your shoulders, making sure that it does not rest on to your vertebrae.

Draw your shoulders back and down to maintain good posture through the move.

The Variation for this move will be that, rather than pushing through your heels, as with most leg exercises, you will be standing on the toes throughout.

If you struggle to balance on your toes, you can start by using an elevation under your heels to get used to the balance. Begin by sitting back, letting your hips push back as if you were sitting into a seat. Your torso and the bar may angle forward, serving as a counterweight.

Aim to squat to a 90-degree angle through the knee or lower. Your knees should not travel over your toes and should stay aligned with the hip.

Pause briefly as you reach 90-degrees (or as low as you can manage) before standing back to an upright position, pushing through the balls of your feet.

Make sure you keep your torso as honest as possible to avoid excessive load in your back.

Common Mistakes– Pay attention to both your posture and your knee, hip and ankle alignment. Avoid excessively tilting forward on both the upward and downward phases, which will put unnecessary stress on your lower back.

Breathing– Inhale as you lower the weight down and exhale as you push back to a standing position. 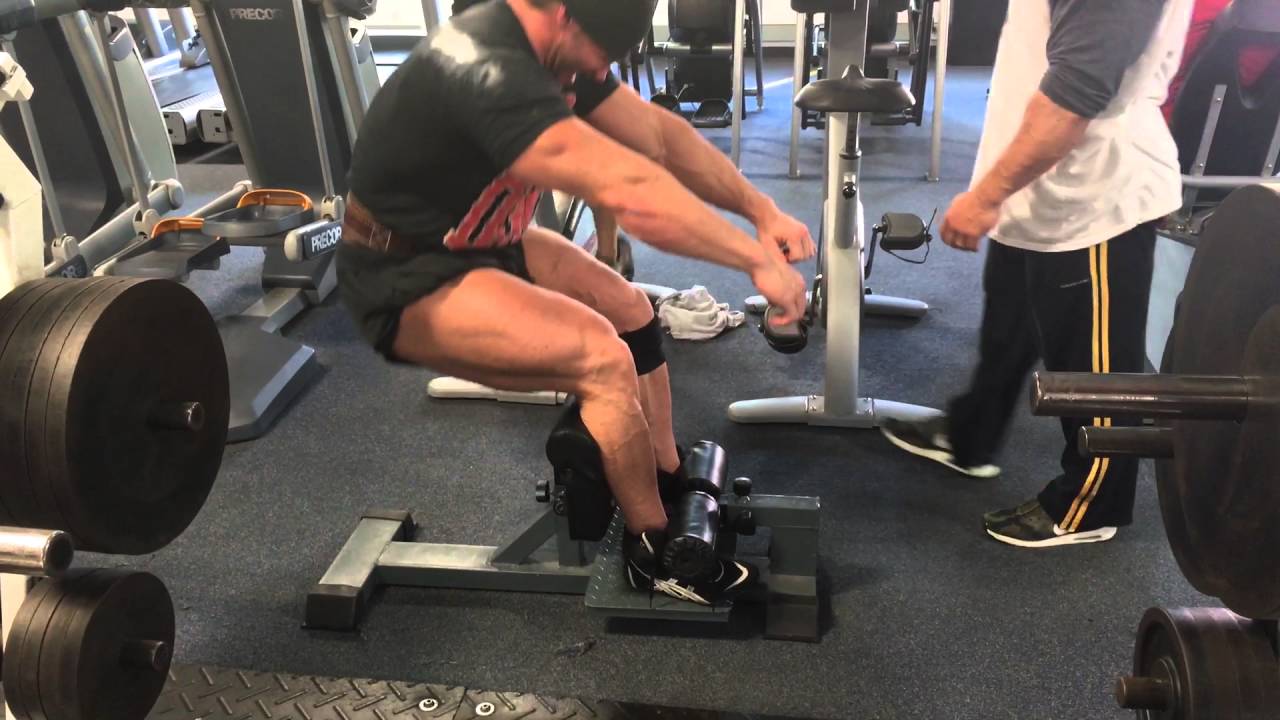 A sissy squat machine helps isolate front quads and teardrop muscles, enabling you to work them out.

One of their best fitness equipment is the sissy squat machine.

This machine works to help strengthen your knees, your glutes, and quads, strengthen hip joints and knees, and your core.

For comfort, the Fitness sissy squat machine comes with extra padding. This vital feature is for calf protection, allowing you to do workout for longer, unlike when you do a squat matrix.

Another great feature is the large non-slip footplate. The plate will enable you to exercise without worrying about slipping. Also, the plate can hold heavy athletes without wobbling.

These Leg Machines is available for anyone willing to try sissy squat and also for those who want to build their muscle. 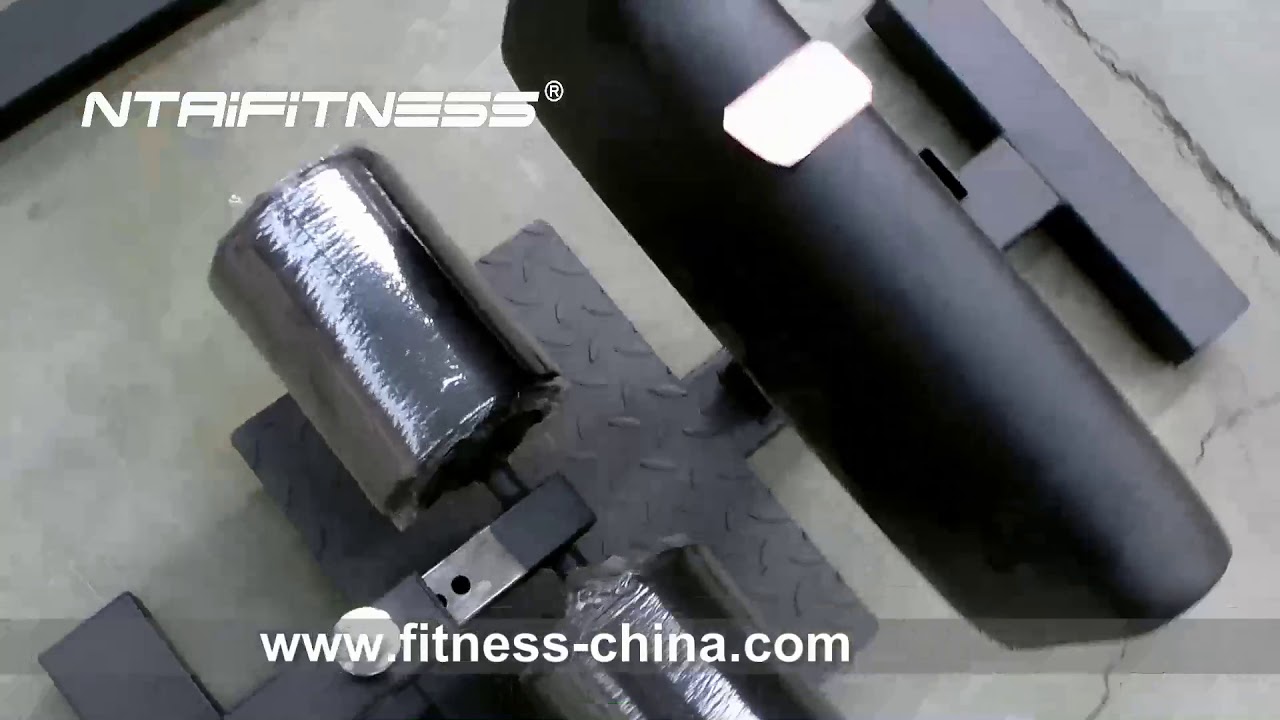